The Entlebucher Mountain Dog (Ent-Lee-Boo-Cur) is the smallest of the four Swiss Sennenhunds. Quite different than their larger cousins, the Bernese and the Greater Swiss, the Entlebucher is an energetic, tireless athlete with the ability to do essentially any activity or sport they are taught.

The Entlebucher can out think many other breeds as well as out think their owner, which requires owners to have a vested interest and dedication to training so that the dog learns the behaviors desired rather than dreaming up their own brand of fun.

The Entlebucher is a very physical breed. They are physical in their activities, putting their all into everything they do and they are physical with their owners, very demanding when it comes to physical touch. Hugs and cuddles quickly become “smooshings” if allowed, and the Entle strongly believes the firmer the contact, the more the love. One sure sign of affection is the body slam, bouncing off their owner with the slightest provocation, just to say, hey, you are mine and I am yours and we are together.

Entlebuchers have a keen sense of humor and enjoy making their owners laugh. They are happy when they can make you happy and they will often go through multiple antics to make you smile.
They are typically quite good with other dogs, but are known to play rough, hard, and fast with vocalization and a playful growl and grumble. Many people that do not know or understand the breed may mistake this for aggression, but most of the time it is simply rough, vocal play.

The Entlebucher typically notices everything in their environment, and can be quite in tune with any changes from normal. Keen sight awareness and keen noise awareness makes this breed a phenomenal watchdog. Nothing and no one will sneak by an Entlebucher and the stranger will likely not be welcome into the home without owner permission. 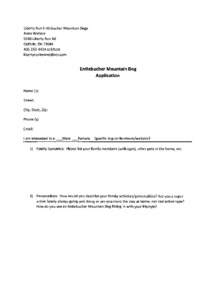 The Entlebucher Mountain Dog originated in Entlebuch, a valley in the towns of Lucerne and Berne, Switzerland.  They were bred for agility and strong herding ability and designed to work in the Alps as a very effective cattle dog.   Exactly how long the breed has been around is impossible to know, but they are well documented in Switzerland’s history.  The first description of an Entlebucherhund dates from 1889.  In 1913, Dr Albert Heim, Swiss veterinarian and dog show judge, declared the Entlebucher as the 4th Sennenhund breed.  Due to WWI, development of the breed went to the back burner of priority and it wasn’t until 1926 that the breed standard was actually developed and an effort was made to develop a separate breed entity.   Until that time, the Entlebucher and the Appenzeller were bred together and were not bred as separate breeds.   With the separation of the two breeds, we see the breeds take different directions in development.   At the time of separation, the primary difference between the breeds was the tail, with a tight ring tail in the Appenzeller, and a congenital bobtail in the Entlebucher.   Today, the Entle in Switzerland has either a naturally long tail or a congenital (naturally short) bobtail.   In the US and other countries where docking tails remains legal, Entle tails are often docked, following the original tradition of the breed, though some breeders are leaving tails naturally long.  There is no preference in tail length according to the American Kennel Club standard or the National Entlebucher Mountain Dog Association.

Overall, the Entlebucher Mountain Dog is a healthy breed that does not require special care.  Like all dogs though, there are always some things that can crop up, and with all breeds, there are some things we can track as "issues" that can be watched for.

Orthopedic Issues
Hip Dysplasia is one issue that breeders should always test for before breeding an Entlebucher, and statistically about 80% passes screening, leaving 20% of the breed with hip dysplasia, though thankfully most of that being mild issues.   Keeping your young, developing Entlebucher fit and not fat throughout the major growth periods as well as being sure to not go wild with physical exercise is the best choice to minimize issues.   CCL (Cranial Cruciate Ligament) tears (equivalent to ACL tears in humans) is probably the most common issue in the Entlebucher.    Their daredevil physicality and sheer enthusiasm to try everything can get them in trouble, and coming down wrong on those knees can indeed cause ligament tears and thus on the surgery table for a ligament repair.   Keeping your Entlebucher fit and not fat, and keeping the crazy jumping minimized is really the way to go.  Patellar Luxation is another knee problem that can be an issue in Entles.  This is where the knee cap does not track as it should, and all breeding Entles should be tested for this condition.

Eye Issues
PRA-prcd is a required DNA test for Entlebuchers.  PRA causes a dog to go blind as they age, but thankfully this is particular disease is 100% preventable with a simple DNA test and careful selection of breeding pairs.   Glaucoma is an issue that has been reported in some Entlebuchers.   Although it is rare, it should be noted, and anything unusual about your Entles eyes should always be checked as soon as possible.    At this point in time, we do not have any definitive tests that would allow us to predict it's development and with that, we don't have a way to effectively prevent it.  Cataracts can happen in Entlebuchers.  Likely hereditary, but for the most part not a serious issue as they tend to be small and not progressive.  PPC (Posterior Polar Cataracts) are by far the most common but are such a minor issue, dogs with this condition are allowed by the Entlebucher Club Code of Ethics to be used in breeding programs.

Entlebucher Urinary Syndrome (EUS)
EUS is a serious condition affecting the kidneys.  For information about EUS, please see the information on the website of the National Entlebucher Mountain Dog Association website.  (https://nemda.org/entlebucher-urinary-syndrome/)

Xena's puppies are growing!   They are quickly growing and exploring and learning about life!   Puppies are $2500 with limited registration.   Show/breeding homes considered.  We are taking applications and deposits at this time.  We have male puppies available.  These boys can leave right around Christmas.

Quizzy is a spayed female retiring from our program.   Quizzy is quite outgoing and friendly with most.  She gets along well with other dogs and with cats.  She broke an elbow a couple years ago, and does have a permanent limp from that, but it does not stop her from going on walks and having a good time.   Not a jogger's dog.  She is rather proud of her roundish figure and enjoys her diet food like it's the best invention there ever was.  In her younger years she spent quite a bit of time going to dog shows.  Quizzy is 8 years old and perfect for a more sedentary human.   Of course our retirees are always welcome to stay with us forever, but they also do well moving to a home where they can be one on one with a human of their own.  Our retiring adults are available for $500.

Trinket is a 5  year old spayed female available to a retirement home.  She is healthy, and strong, but quieter in nature.   It will take her a little time to come out of her shell with a new owner, but given that time, she will.   She tends to get along well with other dogs and has been around cats. She will do better with structure and routine and will be wary of strangers.   Our retiring adults are available for $500.

Happy is a 6 year old spayed female available to a retirement home.  She is healthy, strong and active.  She tends to get along well with other dogs and has been around cats.  Our retiring adults are available for $500.

We have one girl available from Windy's last litter.   Windy has produced very well for us and her puppies have made wonderful additions to many families.    She was born on November 2, 2021 and is ready to go to a great family. She is $2500 on limited/non-breeding registration.

Our boys are fully health tested and available for stud to approved bitches.   Inquire for details.

"Cubby" is a full brother to Castle.  Cubby is a gentle soul who loves life on the farm.

"Castle" is amazingly sweet, a true ham, and given the chance, class clown.   He loves to make you laugh at every opportunity.  He was a not so serious show dog, but did manage to complete through the Bronze Grand Champion level.   He'd rather make you laugh than impress.

Liberty Run's The Fire Within

"Ruckus"
CH Liberty Run's A Ruckus Among Us

Liberty Run's dedication to producing quality puppies means that puppies will not always be available.  Applications are kept on file and puppies are placed according to suitability of match with the applicant.  Deposits are not accepted until we actually have a puppy to match with your family.  Puppies are placed around 8 weeks of age. Due to new USDA/APHIS rules, we must meet you in person to transfer the puppy.  Puppies will not be shipped, so either you must come here, or fly one of our team and the puppy to an airport near you.

Show puppies are placed on contract requiring showing in AKC conformation events, and obtaining clearances prior to breeding.

We focus on breeding healthy dogs that are wonderful representations of their breeds and have shown longevity in AKC dog sports and true dedication to quality breeding with a strong focus on rare breeds and breed preservation.

We are Silver Level AKC Breeders of Merit with continued focus on quality and competition and strive to provide ongoing support for the families that add one of our puppies to their home.